To see all swiss and quad results, visit this USCF page. (Only completed events shown)

Here are the results and standings for the first round of the Thanksgiving Swiss. There was a match game as well: Millstein - Gordon 1-0

I definitely believe the two sections make for some quality competitive games. Quite a few Thursday night.  See you next week.  Ed

A lot of interesting games last night in the Halloween Swiss, including five draws in the Open Section. It is definitely competitive.

Comment from Jim Larsen:  What an amazing turnout, and some great games. Thanks for directing, Don.

Final results of March Madness Swiss has been posted to the USCF.  Check to view ratings and results!

Kevin Chen and Greg Nolan were presented trophies for being the 2022 Club and Reserve Champions, respectively. Congratulations to them both.

The new tournament season has begun with the March Madness Swiss. We will have 8 more tournaments until play starts to determine the 2023 champ. We'll be keeping a tally of each player's wins and draws as the year goes along to determine the the top 8 who will qualify for the Championship. Everyone else will compete in the Reserve. 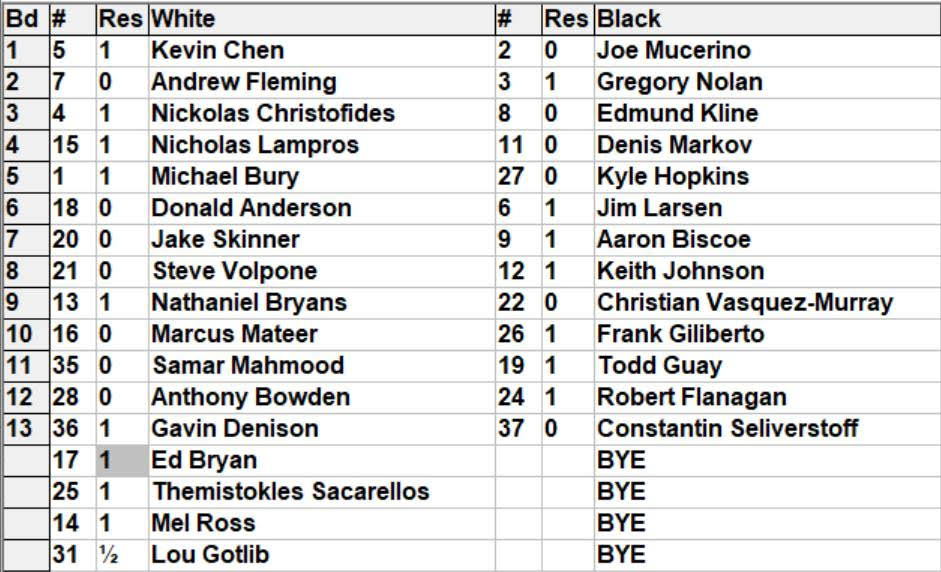 The 2022 WCCC Championship begins next Thursday, January 6. I thought that all active club members would be interested in following this event. I have included the schedule and Jim Larsen will update the weekly results which we will forward to you.

Keep in mind that everyone that plays on Thursday evening is eligible to get into next year's championship. It's simple. The eight players with the highest point total at the end of the year get in, depending only on ties for the last spot. The points start accumulating after the championship is completed.

Also, keep in mind that everyone not included in the championship can still come on Thursday and play rated games in the reserve section. One benefit of this is that we will not be facing those eight top players.

I wish all of you a very HAPPY NEW YEAR!!.

Here are the numbers which coincide with those on the "Grid" that I sent earlier. If you have that you can see who you will play and in what round. I will send out the schedule by date and by name, rather than number in the next day or two. GOOD LUCK TO EVERYONE.

BYW, Keith drew Denis Markov in a long battle which saw each with less than 10 seconds. Nolan lost to Joe Mucerino, so Keith is in by a point and a half. Good fight all the way. I congratulate all of you.

It seems that the consensus is that next year we assign the positions in the Championship based on their positions in which they finish the year. This system should create a desire to get more points during the year, so maybe not accepting a draw would be advantageous. For those of you that were not present tonight or have not weighed in on the email discussion, please feel free to share your thoughts. Remember, this is a club and should be exciting and fun. I believe this change adds both.

It's getting tighter and more exciting. Nick Lampros, even with a half point bye for last night is mathematically out. He joins me. Bob Flanagan is still in the hunt even with a loss last night.

Oct 15, 2021 - Founder's Swiss results from Donald Anderson.  The last round was played yesterday.  Don, many thanks for running the event!

The Player Ratings Chart and match results for 2021 matches has been updated with the results from the Founder's Swiss has been updated. It shows the player ratings as of Oct 15th and the wins and losses versus other club players.

Oct 1, 2021 - From Donald Anderson:  Some upsets this week. Flanagan had a draw against Biscoe and Anderson won over Trueman. On a side game Gotlib was victorious over Biscoe

Sept 11, 2021 - Club standings have been updated for the Liberty Swiss results

Sept 10, 2021 - Ed posted the final results on the USCF club tournament page of the Liberty Swiss

August 16, 2021 - First round results for the Liberty Swiss.  You may join the swiss at any round!  You must be fully vaccinated

April 29, 2021 - We are back playing USCF matches on Thursday's.  One must be fully vaccinated.

March 2019 - We moved to a new bigger location for our growing club!  We play USCF matches starting at 7:30 as always.  Our new location is First Presbyterian Church, 130 West Miner St, West Chester, PA